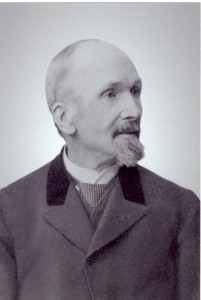 The composer THÉODORE GOUVY was born on July 3rd, 1819 in Goffontaine (Lorraine) and died on April 21st, 1898 in Leipzig. His entire life was influenced by French as well as German culture and politics.Though he came from a wealthy family of French industrialists, Gouvy was given German citizenship because his birthplace Homburg-Haut had fallen to Prussia four years before his birth as a result of the Treaty of Paris. Gouvy was granted French citizenship only at the age of 32.  A Frenchman by origin and in his heart, his musical work was affected by French and German influences in equal measure: Gouvy obtained his musical instruction from the French professors Antoine Elwart and Pierre Joseph Zimmerman, because, due to his lack of French citizenship, he was not allowed to participate in examinations at French universities or at the Conservatoire de Paris. Among his musical idols were Joseph Haydn, Ludwig van Beethoven and Robert Schumann.
In 1844, Gouvy became a member of a circle of artists in Rome frequented by César Franck and Nils Gade. He was friends with Karl Halle, acquainted with Frédéric Chopin and Hector Berlioz and kept up a lively correspondence with Camille Saint-Saëns, Théodore Dubois, Franz Liszt, Ferdinand Hiller, and Johannes Brahms.
His First Symphony Op. 9 was premiered in Paris in 1847 and positively received by the critics; in that same year, the _Gazette musicale_ already declared Gouvy to be one of the most significant French composers of his generation. In the Journal des Débats, Berlioz commented favorably on Gouvy in 1851. In 1862, Gouvy surrendered to the expectations of the Parisian music world, which in that time was under the sway of Italian opera, by starting work on his opera “Le Cid”, based on the play of the same name by Pierre Corneille.
In 1864, the Saxon court theatre (today the Semper Opera) became interested in producing the work.Gouvy had worked intensely with the tenor Ludwig Schnorr von Carolsfeld, who had been cast in the leading role, for a year, before Schnorr died unexpectedly. Following this, the opera was withdrawn and never performed afterwards. Gouvy did not find public recognition in Paris until very late; the Société des concerts du conservatoire performed works of his only in 1868.
In 1873 he was elected to the committee of the Société nationale de musique, additional distinctions followed. Nonetheless, Gouvy was disappointed at the lack of success his music had had for so long and therefore refused in 1875 to accept the Prix Chartier for the best String Quartet, out of wounded pride.
After the death of his mother in 1868, Gouvy moved to Hombourg-Haut and lived there with his brother Alexandre and his sister-in-law Henriette, the latter of whom valued and encouraged the composer’s work. Alexandre enabled both of them to retreat safely to Switzerland during the Franco-Prussian War.
Eventually, Hombourg-Haut also became German according to the Treaty of Frankfurt, which was signed at the war’s end in 1871.
Starting in 1874, Gouvy’s choral music began to be performed, predominantly in large German cities such as Leipzig, Wiesbaden, Duisburg, Halle, Frankfurt (Main) and Frankfurt (Oder).
Gouvy returned to Paris for what would be the last time in 1889 to visit the World’s Fair (Exposition Universelle). He died in 1898 in Leipzig during a concert tour after suffering a heart attack. He was buried in Homburg-Haut.
Théodore Gouvy left behind a variegated oeuvre of instrumental and vocal music that combines “German earnest with French elegance”.He created this work during a period of high political tension between Germany and France, which was to culminate in the Franco-Prussian war (1870-71).